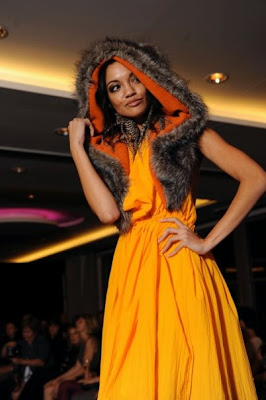 [A kjurek couture look modeled by Tearra; Image by Denis Jeong Plaster Perfecta Pictures]
We’ve hit the weekend at MNfashion Week, meaning there is no conceivable way I can hit every single event. But it won’t be from any lack of trying. First up is the Fresh Fruits Basket Fashion Show at MCAD, part of the annual anime workshop Schoolgirls and Mobilesuits. It’s actually not part of MNfashion Week officially, but it seemed deserving of a spot on my agenda. The show is full of MCAD students, and I’m clearly one of the oldest people in the room. I’m there mainly for the Libertine Asylum, a local trio of neo-Victorian and Lolita designers. Well, not so local anymore – it turns out Megan Bishop and her line Apatico have moved to Seattle. Regardless, it appears she’ll still play a strong role in Libertine’s shows in the future (including the Carpe Noctem show at the Loft on November 6). 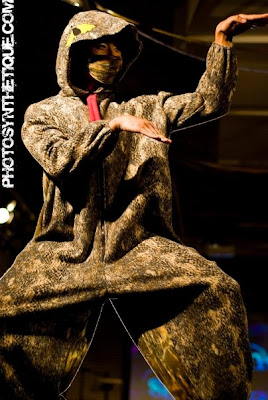 [Image by Drayke Larson/Photosynthetique]
The show started off with models dressed in animal pajamas. Samantha Rei of Blasphemina’s Closet filled me in: These are not mere pajamas, but “kigurumi” (or disguise) pajamas. “They are SUPER popular in Japan.” Popular characters include Stitch of “Lilo and Stitch,” Marie from “The Aristocrats,” Pikachu and Winnie the Pooh characters. Apparently, teens and young people wear them in public in Japans with tennis shoes, face jewels and backpacks.

CLICK HERE TO READ MORE at l'etoile magazine.
Posted by Unknown at 1:41 PM