Check out my style writing in this week's Vita.mn, particularly my interview with none other than Christian Siriano: 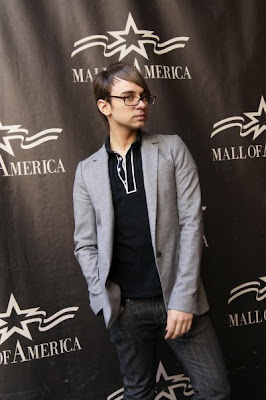 [Image provided by Mall of America]
Mall of America gets 'Fierce'
After winning the fourth season of "Project Runway" in 2008, 23-year-old fashion designer Christian Siriano has shown at New York Fashion Week four times, had his entire fall 2009 collection picked up by Saks Fifth Avenue and designed collections for Puma, Bluefly, Payless and even a beauty line for Victoria's Secret. Now, he's penned his own style guide, "Fierce Style: How to Be Your Most Fabulous Self," which he promoted at the Mall of America last weekend. We sat down with the diminutive designer at the megamall.

Q: Is this your first time in Minneapolis?

A: Mm-hmm. We're staying at the W Hotel, and when we got in, it was literally a nightclub. I was like, I've never seen so many sequins. It was a weird Vegas moment. It was really crowded and everybody was wasted, and we're waiting to get into the elevator, and everyone's like "Wahhhhh, I love youuu!" And I'm like, where are we?

Q: So you have a new Payless line coming out.

A: Yes. Fall is in stores now, holiday launches next month, and they're really, really good. It's my favorite collection so far. The fall collection was my first collection, so it was very tame. This new collection is very edgy, it's very downtown, and I named all of the shoes after friends of mine. There's a cool, zippered pump, and it will be the best New Year's/holiday party shoe.

Q: And then you have your book, you have shoes, you have Victoria's Secret...

A: The whole world is mine! And clothes.

Q: You know Prince is from Minneapolis. What would you dress him in if you could?

Q: What are you going to be for Halloween?

A: I can't tell! It's a surprise. I posted on Twitter that I was going to be a Disney movie character. It's very iconic.

Check out the full text to the interview exclusively at Vita.mn online. 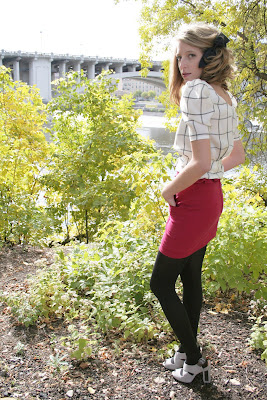 [Emily Bryngelson in her Tender Cuts line]
Tender Cuts at Cliché
A fashion education is never complete without a stint working in retail. That's the lesson that up-and-coming designer Emily Bryngelson must have learned, having worked at local boutique Cliché since May. It turns out that while the shopgirl and sometime model has been studying apparel design at the University of Minnesota, she's also been crafting her debut line, Tender Cuts. The retro-tinged collection quietly hit the store last week, and not only is it on-trend and well constructed, but it offers enough unique touches to make Bryngelson one to watch. 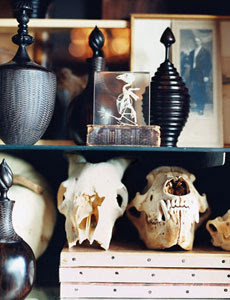 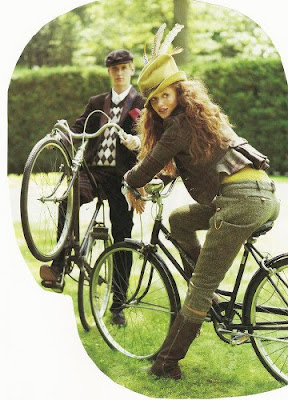 [Tweed ride inspiration via Marie Claire Magazine]
Mill City Tweed Ride
Throw on your most dapper elbow-patch jacket, newsboy cap and knickers -- the first Mill City Tweed Ride is on. A tweed ride is a new, retro-inspired form of critical-mass bike ride in which riders are expected to dress in traditional British cycling attire, namely tweeds. Riders will gather in the 8-acre Gold Medal Park along the Mississippi and bike past such landmarks as Mill City Museum and Grain Belt Brew House. If your woolens aren't enough to keep you warm, pack a flask. (5:30-7:30 p.m. Fri., free. Gold Medal Park, 2nd St. & 11th Av. S., Mpls.)

Check out more local fashion & shopping events for this week via a Vita.mn online exclusive: 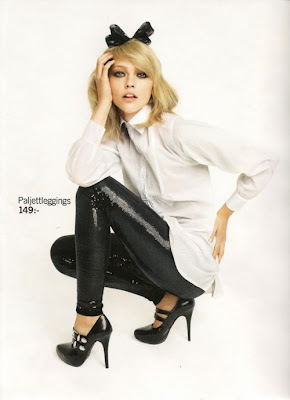 [A Fall 2009 look from H&M]
THURSDAY: H&M grand opening at Southdale
It's hard to believe we've only had Swedish cheap-chic retailer H&M in our state since 2005. Now, we're welcoming our third H&M location, this time at Southdale. It's doubtful as many people will wait in line as they did when the Mall of America store opened, many should still line up for the free giveaways and special offers they're promising the first 100 shoppers, particularly a gift card with a random value of $10-100. (Noon-1 p.m. 1835 Southdale Center, Edina.) 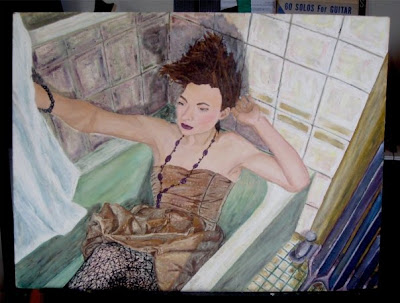 [A painting by Ryn Gibson]
FRIDAY: Ryn Gibson artist open house at Cliché
Check out the colorful, abstract art of Ryn Gibson during the first artist open house to happen at Cliché in quite some time. The young student's Elizabeth Peyton-esque paintings of swooning girls are a chic complement to Cliché's racks of wearable dresses and separates. Even if you don't care about the art, all clothing and accessories are 25 percent off during the reception, and there's always plenty of wine and scrumptious snacks to go around. Mark your calendars: there's also word the boutique is hosting a local designer sample sale on November 8. (7-9 p.m. 2403 Lyndale Av. S., Mpls., 612-870-0420.) 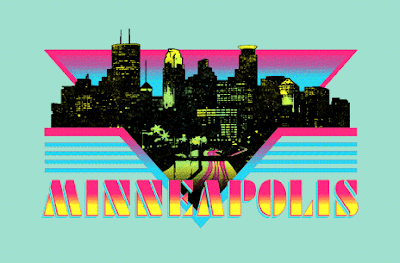 [The original "Minneapolis" t-shirt design by Anthem Heart]
SATURDAY: Worn to be Wild: Anthem Heart Studio Series
How many chances to you have to get your own custom-printed t-shirt by one of the hottest t-shirt screen-printers in town? With their new monthly studio series, now you have one chance every month. For the second in the series, Anthem Heart is releasing a brand new version of their hugely popular "Minneapolis" shirt (which shows a Miami Vice-esque view of the Minneapolis skyline). You can pick your own ink colors and shirt style for only $10, or $5 if you bring your own shirt. And it wouldn’t be an Anthem Heart studio event without cheap drinks (PBR & Red Bull are sponsors), DJs (Book B, Gigamesh, Real Talk Radio, The Nightstalker, and Deus Ex Machina) and live visuals (Time Squid). Last month's party was one of the craziest-fun Mpls has seen in quite a while. (10 p.m.-4 a.m. Free. 1224 Quincy St. NE., 2nd floor, Mpls.) 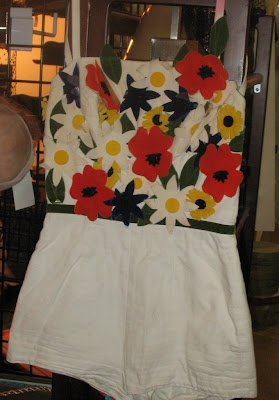 [A vintage playsuit from last summer's Midwest Vintage Show]
FRIDAY-SATURDAY: Midwest Vintage Clothing, Jewelry and Textile Show at State Fairgrounds
The biggest flea market trade show in the Midwest makes its triannual round to the Minnesota State Fairgrounds with its collection of over a century of one-of-a-kind wearables and collectibles. Friday's event kicks off with a fashion parade, a cash bar, prizes and contests, with demos all day Saturday and concessions all weekend. Serious shoppers will come in for early shopping at 3 p.m. on Friday if they're willing fork up $30. (5-10 p.m. Fri. 10 a.m.-5 p.m. Sat. $5-7. Fine Arts Building, 1755 Dan Patch Av., St. Paul, 612-208-1085. www.catspajamasproductions.net) (Check out my recap of the last Midwest Vintage Show at the651.com) 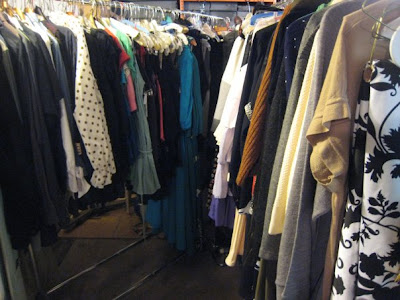 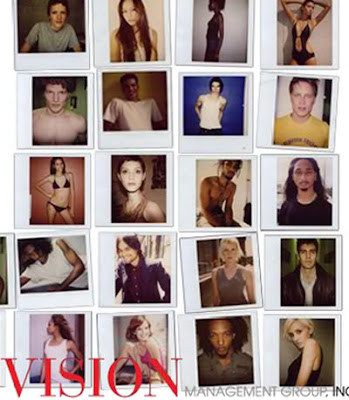 SUNDAY: Elite & Vision Model Casting at Vision Studios
Model agent Micki Schneider of Elite Model Management in NYC is in town for a joint model casting with Vision Management Group of Minneapolis. Schneider has worked with the ikes of Coco Rocha, Alessandra Ambrosio, and Veronica Webb, and clients ranging from Vogue and Elle to Neiman's and Saks. They'll be scouting for new models and talent, if you're interested. (1-4 p.m. 25 N. 4th St., Suite 501, Mpls. View the facebook invite for more info.) 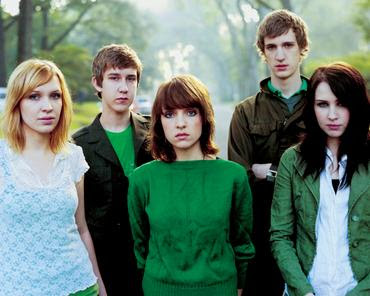 [Eisley plays Station 4 on Thursday]
Posted by Unknown at 9:00 AM