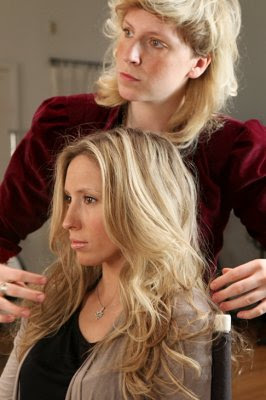 [Photo: Yahoo!]
Hairstylist Kelsy Osterman, once a fixture of the Twin Cities fashion scene and was one of my partners in stylist collective Eclecticoiffeur, has been making waves since her move to New York - tons of gigs at New York Fashion Week and doing Courtney Love's hair just to mention a couple. She just got some nice press after being quoted by the New York Post's fashion column about the wave of requests for Kate Middleton's hairstyle.

“It’s a definite buzz. Since the news [of the royal engagement] dropped, we’ve had a lot of women coming in and asking for either her cut or rich color,” says Osterman. One of the main components of the coif is half-coverage of the forehead, according to Osterman, who says the timing for the cut is perfect.

“In the last couple of years, it’s been all about the full bangs, and people are growing them out.”

Congrats to Kelsy on the great press!
Posted by Unknown at 3:46 PM